OK, I'm officially back to reading LJ. I stopped in the madness leading up to and after June Faire, didn't have time to catch up for a few days... and then the backlog dissuaded me from catching up, and on and on in a vicious circle.

But I found that I missed LJ, and resolved to simply start over without worrying about the backlog.

Is this thing on? Anyone else still here?

The new cage for the guinea pigs came in yesterday, so I headed off to Silverdale to the get the parts that didn't come mail order. (The existing isolation* cage is sized for one adult piggie, it isn't quite big enough for two active tweens.) I needed new plywood for the base, and it took sorting through three stacks at Lowes to find a sheet flat enough. The plywood we get nowadays is *such* crap, I don't trust this piece to not go all potato chip shaped in a month or two now that it's not under the weight of other sheets. (The cage and piggies together only weigh maybe four or five pounds.) If that happens, I'll have to add a frame which isn't all that difficult, just annoying as hell. OTOH, I did kinda shoot myself in the foot... I usually prefer Lowes, but Home Despot generally has better wood. (Better being relative, mostly meaning 'less crappy' in this instance.)

When we're ready to move all the pigs in together, the old isolation cage will be cannibalized to extend the main cage.

* New piggies live in a separate room for a month to ensure they aren't bringing any diseases or parasites with them. The babies need a special diet for the next two months as well.

Out in the deep cold black, you walk a narrow tightrope far from home or help... we knew this and we went despite knowing this.

(Those of you new to my LJ or who don't know me in real life may be unaware that I am a former submariner. Sometimes I get a bit maudlin or introspective about it.)

Thanks everyone for your kind words regarding little Sarah last week...

Brenda and I were talking after her passing, and we think that the best way to deal with the loss of a little friend is to fill that hole with another. There's so many piggies out there in need of a good home, it's selfish to just think of the past and what might-have-been.

So, we started looking on Petfinder, looking for a single girl to join Rose and Molly and we found a baby over in Seattle. (Single pigs can be hard to find sometimes, as knowledgeable folks know they need to be paired up for companionship. We thought ourselves lucky to find one so fast.) So, Saturday we drove over to Belluve to meet her - only to be disappointed. She was actually a he that had been misidentified in the Humane Society's paperwork. And he was such a friendly and happy little boy, we were heartbroken... But two cages indefinitely is more work than we want to take on, and grossly unfair to saddle our pigsitters with.

Then the adoption counselor pointed out that he had two sisters available that we not (currently) listed on Petfinder. We were hesitant at first, because adding two piggies will mean additional expense in expanding our existing cage. But the more we thought about it, adopting them both started to sound like a better and better idea. Babies need special diets, and so a single one would be housed alone for over three months. A bonded pair on the other hand could keep each other company... so, before we knew it we were agreeing to adopt both little girls.

Meet Abigail ("Abby", nearest the camera) and Emma, the two newest members of our menagerie.

We took her to the vet Thursday for a followup and a physical to get ready for a minor procedure. She had to be anesthetized for a blood draw, and never seemed to recover afterwards. She ate and drank very little from Friday onwards, and we started hand feeding her yesterday. Her breathing seemed a little labored last night, and worse this morning so we took her in for an emergency appointment at the vet's. They took her straight to the ICU, and she passed quietly while the vet was examining her.

Farewell skittish little Sarah, where you've gone there is truly nothing to be afraid of anymore.

The first of the photo's I took over the weekend in Seattle... 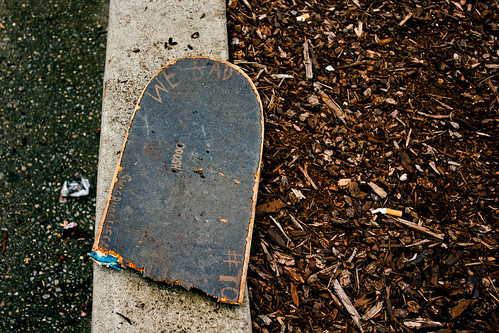 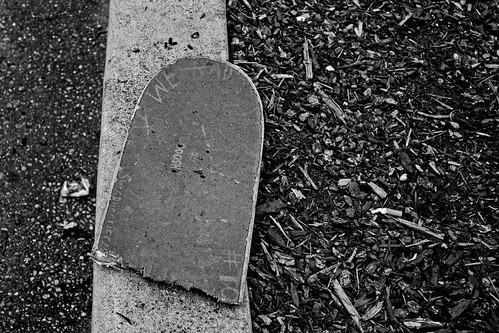 It's officially Getting Warmer (the indeterminate season we have up here in place of Spring) and the calender is starting to fill... So, these should be coming more often. (Assuming I remember to write them...)

Saturday was a bit of an odd day... Matt

hl_mateusz has been in the hospital for bypass surgery, and I was tapped to drive him home. (He couldn't fold up to get in the back seat of their car, and isn't supposed to ride in a seat with an airbag.) So pretty much all day was spent waiting by the phone... and it wasn't until 4ish that the hospital got their act together. When we tried to get him in the van, it was embarrassing to discover that I *couldn't* move the middle seat back like I thought I could so he ended up being more cramped than we had hoped. (I think I was confusing this van with one of the one's I'd owned previously... which brings up the question of what exactly *are* those fittings in the floor for?) Driving was a trial, as I was trying to be as gentle as possible but the roads are bumpy in places and I couldn't be a hazard to other traffic either by starting or stopping too slowly. We finally got him home and some re-arrangement of their living room done (he's sleeping there as he can't do the stairs to the master bedroom). We were invited to stay for dinner, but bailed pretty quickly after dinner because it was getting late-ish and he was very plainly getting wore out.

Sunday, we went over to Seattle Center for the Seattle Cherry Blossom & Japanese Cultural Festival and had a blast. There were a lot of interesting displays and almost all of the artisans were more than willing to chat about whatever it was they were demonstrating/displaying. I was kind of disappointed with the carpentry display though, the gentleman had something of a canned routine and wasn't very responsive or interested when I tried to go a bit beyond that... had there been a crowd, I would have understood, but it was just B and I at the time.

There was a display of Japanese photography from the Tōhoku region (where the earthquake and tsunami hit two years ago) that was simply stunning. It wasn't pictures of the aftermath, but historic, documentary, and fine art photographs from the last half century. I used the show program to make some notes for future research into the photographers.

I took a bunch of pictures (of course) and some should be spectacular... One set in particular I have high hopes for, there was a Taiko drumming performance in Center House (which they've gone back to calling the Armory for some unknown reason), and while the light wasn't bright enough for stop-motion, it was bright enough for longer exposures.

Two views from our hotel room in Seattle.... (Click through to see them larger) 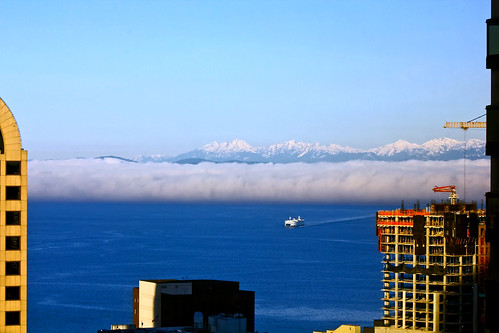 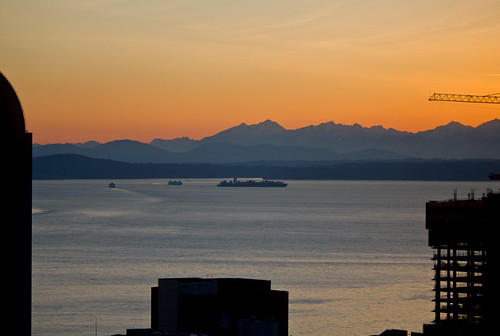 *WOW* I though this would prove challenging, but it exceeded my expectations and then some. Changing and challenging light conditions, bad poses by the cosplayers, bad composition by me... and all of these things having to be dealt with on the fly as fast as possible. These folks are here to enjoy the con too, even if they do want to share their work - it's not fair to take up too much of their time. (And some of the folks in better costumes or of more popular characters could and did get asked to pose again and again.)